Flanger pedals are great tools to add an extra layer of texture and depth to your tone. Just like other modulation pedals, they are great for playing out riffs and solos with an analog rolling effect that stands out in your band’s mix and captivates your audience.

They are often described as having a special vibration rumbling noise that other effects can’t produce. Any flanger fan can name his favorite pedals for the effect, but other people who have never fully tried the effect or rarely use flangers may have trouble deciding on which flanger pedal to buy.

For some time, pedals that have great reliability and quality were sold at expensive prices. Nowadays, the market is filled with all sorts of affordable pedals that provide great quality and sound for all guitarists to enjoy.

Some of these pedals are miniature-sized standard effects, and instead of trying to reproduce the unique character of more expensive pedals, most of these affordable stompboxes have their own unique “voicing” and tone – some have nothing special about them and some are not so great. However, some of these budget-friendly pedals are affordable clones of more popular or higher-end, next-level stompboxes.

The Donner Jet Convolution flanger guitar effect pedal is one of those great affordable clone pedals that provide guitar players with a classic flanger tone that many guitarists have come to know and love. It is a copy of the EHX Electric Mistress and while it does not truly match up to this fan favorite, the Donner Jet Convolution flanger does a great job at emulating the EHX flanger for half its price tag.

Donner has produced a wide range of affordable mini pedals, almost all of which sound great and offer way more for what you pay for, and the Donner Jet Convolution flanger is one of these bang-for-your-buck products from the company. If you’re wondering if the Jet flanger is for you, proceed to the next part of this review.

The Donner Jet Convolution is perfect for guitar players looking for a budget flanger pedal to add to their rig. It’s great for those who have never tried out a flanger and would like to learn how to incorporate the effect into their playing.

This can help guitarists decide whether or not they want a flanger in their rig before spending on something more expensive. It is also great for those building a pedalboard on a budget and who want a reliable flanger that sounds great within the $30-$40 price range.

Before we deep dive into our review, let’s look at some of the pros and cons of the Donner Jet Convolution Flanger Pedal: 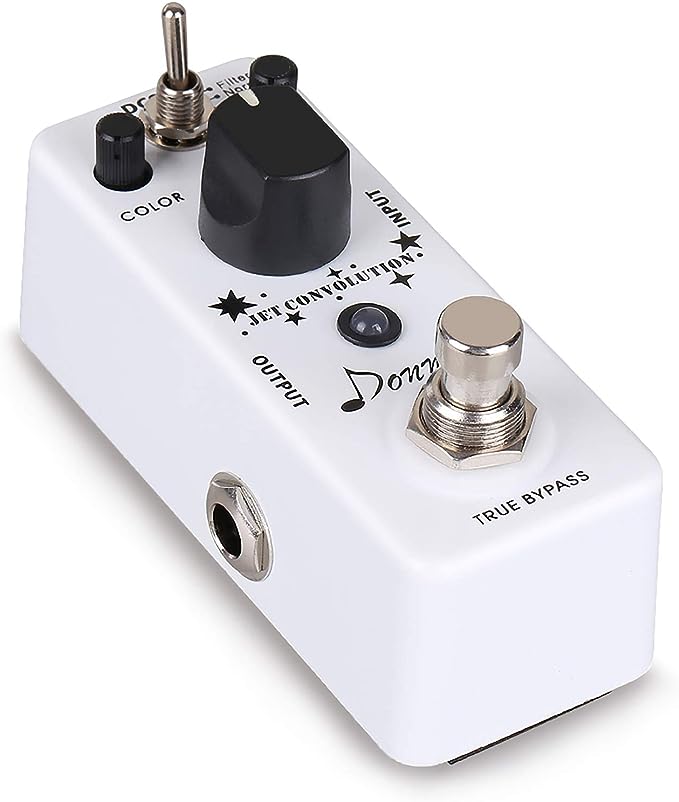 Donner Jet convolution Flanger Pedal is a very close and affordable emulation of the famous EHX Electric Mistress flanger. It is perfect for players trying out the flanger effect for the first time before moving on to more costly boxes.

Get it on Amazon

Many other budget-pedal brands have taken a shot at producing a clone of the EHX Electric Mistress, and the Donner Jet Convolution flanger guitar effect is one of the decent ones in the market considering its price. According to online shopping sites, the pedal features “next level gentle and flat variation, special vibration rumbling noise, and rolling effect”.

While this statement may scare off some customers due to the spelling errors and confusing description, the Donner guitar effect pedal is still a very good flanger pedal especially if you consider the $35 price tag.

First, let’s talk about this guitar effect pedal’s good features. The Donner flanger features a simple white case made of aluminum alloy which gives it the durability it needs to survive countless nights of performances and hundreds of stomps on its tiny frame.

Next are the drawbacks of the pedal. While the Donner Jet Convolution flanger guitar effect pedal is labeled as true bypass, the pedal sucks out some tone. Upon testing, there is a noticeable interference with the guitar’s sound which disproves its true-bypass feature. Another drawback is the incompatibility with a 9V battery. However, this is not surprising for a guitar effect pedal that is as small as the Donner Jet Convolution.

The Donner Jet Convolution flanger guitar effect has three control knobs to adjust and shape the effect, as well as a toggle switch for even more versatility. The larger knob in the middle is the Rate knob, which allows you to adjust the speed of the effect.

Next is one of the smaller knobs found above this, the Color knob. This parameter allows you to change the intensity of the guitar effect and acts as the depth control. Next to this is the Range knob, which allows you to choose where you want the flange to concentrate in your signal’s frequencies – from the lower frequencies up to the higher ones.

The toggle switch also allows you to change between Normal mode and Filter mode. The Normal mode makes the Donner guitar effect pedal operate like a normal flanger, while the Filter mode freezes the effect and emulates a metallic filter. This control takes inspiration from the EHX Electric Mistress, and the manufacturers have done a decent job implementing it on the Donner Jet Convolution flanger guitar effect.

In terms of sound, the Jet Convolution flanger provides a great-sounding guitar flange that complements riffs and guitar solos. It can’t compete with higher-end and next-level boutique guitar pedals but for the price tag of this pedal, the sound is great.

It’s not an exact copy of the EHX Electric Mistress but it emulates it well enough that some similarities can be heard. The flange is well defined and textured at lower and slow settings, and loses some clarity when the knobs are maxed out. The modes also sound great and the filter mode can be used to produce some unique sounding riffs in a performance.

The sound quality and range of flanges you can get out of the controls are good enough to have this Donner guitar pedal help you practice with the effect before moving on to higher-end flangers. You can even use it for smaller gigs and performances as the audience won’t be able to tell the difference between this pedal and a more expensive one.

For a demonstration of the pedal, refer to this video:

The Donner Jet Convolution pedal is great for guitarists of any skill level who want an affordable flanger for practice and small performances. It’s also great for building a budget rig, as it’s a decent and great-sounding flanger considering its affordability. Its compact size allows you to maximize the space on your pedalboard, and its budget-friendly price tag won’t hurt you if you decide that flangers don’t fit your rig.

While it is a clone of the popular EHX Electric Mistress, it’s not an exact copy but delivers a decent emulation of the pedal. As long as you manage your expectations when purchasing this pedal and keep its affordability in mind, the Donner Jet Convolution is a great flanger at such a low cost.