If you're looking for a mean-sounding metal guitar or a versatile rock machine, the Schecter C1 Platinum may well be the right choice for you. This guitar from Schecter is visually stunning, has plenty of powerful tone, and still manages to be relatively affordable. In our review, we'll take a look at some of the features that set the Platinum apart.

Things to Consider Before Buying a Metal Guitar

Before buying the Schecter C1 Platinum or a similar guitar, it's a good idea to consider a few things:

But before we dive in, let's take a quick look at the pros and cons:

In an electric guitar, the tonewoods used don't always matter as much as they do in acoustic guitar construction. Specifically, you need to take the wood used to make the body into account along with the pickups used (we'll get to those in a minute).

The C-1 Platinum is made with solid mahogany. This wood tends to be especially good for metal guitars, as its warmth and sustain have enough bite for metal while still maintaining tonal balance. If you want to hear mahogany played alongside other tonewoods, check out this interesting video comparison.

The double-cutaway body design on the C-1 Platinum is sometimes called an ultra access design. This means that you get easier access to frets further down the neck. Ultra access might not be a necessity if you're mostly playing power chords. However, if you're focusing on leads, the ultra access design is likely to make things a lot easier.

EMG pickups have a great reputation in the world of metal and hard rock, and the 81/85 combination found on the C-1 Platinum is used by countless hard rock guitarists.

This humbucker combination gives you plenty of tonal versatility--while the 81's sound is often described as "screaming" or "blistering," the Alnico-magnet-equipped 85 adds some warmth. This means that the C-1 Platinum is perfect for both well-rounded chords and well-defined leads. If you'd like to hear the combination in action, check out this video demo of the C-1 Platinum.

The C-1 Platinum has a maple neck, which is common in many electric guitars. Maple is a hard wood that resists warping over time. If it does warp in either direction, the two-way truss rod lets you easily adjust the neck. Some less expensive guitars only have a one-way truss rod, and very cheap guitars may have no truss rod at all, so this is a useful feature if you want to keep your C-1 Platinum playable.

Schecter Guitar Research calls the neck shape of this guitar a "slim C," so it's a little thinner than most. This is helpful if you need a guitar that's built for speed, and the C-1 Platinum definitely is. The tone is warmed up by the Tusq nut at the top of the neck. The addition of a Tusq nut may not seem like much, but on a guitar that's this affordable, including a Tusq nut is somewhat unusual.

As for the fretboard, it's made of ebony and comes with special platinum inlays. Ebony is a high-end fretboard material that adds some bite to your tone and is also highly playable. If you want to learn more about different fingerboard woods, this comparison video may be helpful.

It's also important to note that the neck of this guitar is slightly longer than some--it's a 25.5" scale, meaning you get a chime-like sound and excellent responsiveness.

Finish isn't usually the most important thing to consider when buying a guitar, but the C-1 Platinum is unique enough that it deserves its own section. Schecter Guitar Research consistently comes up with unique and beautiful finishes. The C-1 Platinum is available in Satin Black and Satin Chrome. Both looks are ideal for rock or metal players, and the Satin Chrome especially makes for a standout appearance.

Both the Satin Black and Satin Chrome finishes come with unique platinum binding and fretboard inlays. Many players have noted that the C-1 Platinum not only sounds like a much more expensive instrument than it is--it looks like one, too. Check out the video above to see the finish for yourself.

If you can't try out the C-1 Platinum in person, reading other guitarists' opinions can be a helpful way to determine whether this is the right guitar for you. Here are some reviews we've found online: This detailed review may be especially helpful for those who haven't played a Schecter guitar before. This reviewer was primarily an Epiphone player before, but they found that the C-1 Platinum had outstanding tone and playability for the price.

Like the review above it, this one expresses surprise that EMG pickups would come stock on any guitar, let alone one at this price range. Like many people who purchase this Schecter guitar, this person found it to be highly playable.

This balanced review points out a few potential issues with the C-1 Platinum. While some buyers seem to like the clean tones it produces, this person ran into some issues when playing clean at high volume. They also point out that the high string tension (likely due to the longer scale) may not be ideal for everyone.

Before purchasing the Schecter C 1 Platinum or any other instrument, it's often wise to look at some similar electric guitar options and compare. Here are three you may want to consider alongside this one:

How it Compares to Schecter C1 Platinum

Schecter Guitar research has a reputation for producing quality yet affordable guitars for rock and metal, and the Hellraiser is a great option to consider alongside the C-1 Platinum. This one also has a mahogany carved-top body. The top is quilted maple, and it comes with EMG Active 81TW/89 pickups and a Tune-O-Matic bridge.

If you prefer the active pickups on this guitar and are looking for a bit of an aesthetic upgrade, be sure to check this one out!

How It Compares To Schecter C1 Platinum The Reaper is another great metal option from Schecter Guitar Research. Notably, while the Reaper-6 is a double-cutaway design like the C-1 Platinum, it has a body made of swamp ash instead of mahogany. The poplar burl top is finished in satin burst, giving it a truly unique appearance. It comes with Diamond Decimator humbuckers and has a hard-tail bridge.

The Reaper-6 and the C-1 Platinum are just about the same price. But if you're looking for something a little different, be sure to check out the Reaper-6!

How It Compares To Schecter C1 Platinum 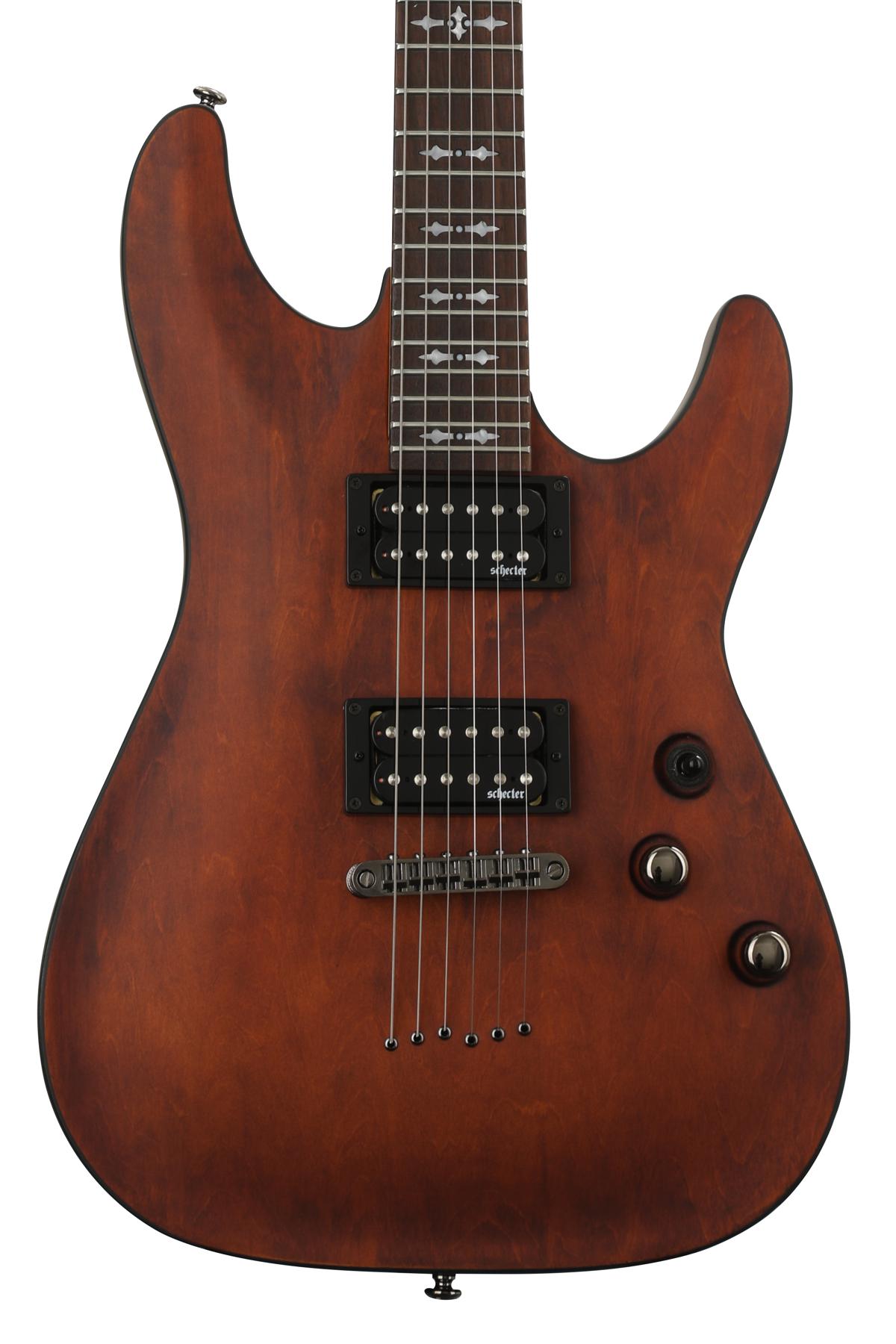 If you like the Schecter C-1 Platinum but are on a bit of a tight budget, the Omen-6 might be a better option. This affordable alternative has a basswood body to keep costs lower, and it's equipped with Schecter's own Diamond Plus pickups. A slim maple neck with rosewood fretboard (complete with pearloid semi-goth inlays) helps keep it playable.

If you need a less-expensive option that can still shred, make sure you give this guitar a look!

For those who like saturated tone and stunning good looks on an electric guitar, we think the Schecter C-1 Platinum is an outstanding choice. With active EMGs, a solid mahogany body, and classic Schecter playability, this is a guitar that offers the high-output, high-quality sound that rock and metal guitarists need. Even with all of its remarkable features, the C-1 Platinum still manages to be relatively affordable, too. Click here to check it out!